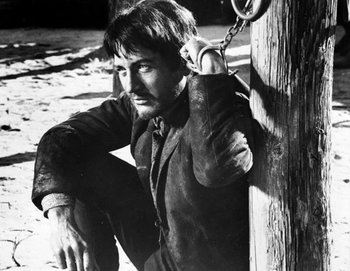 It's an easy film to describe: it's Rashomon, remade as The Western.

In this version, a preacher (William Shatner) and a prospector (Howard Da Silva) take shelter from a heavy rainstorm in a remote desert train depot, and discuss the bizarre trial they attended the day before. A traveling Con Man (Robinson) joins them, and they tell him the story.

Notorious Mexican outlaw Juan Carrasco (Newman) ambushed a former Confederate colonel (Harvey), robbed him, and sexually assaulted his wife (Bloom), before the husband was killed. But Carrasco's testimony differs strongly from the wife's, and, via a Native American shaman (Paul Fix), the husband gets his own say. And it turns out the prospector knows more about the whole affair than he's been letting on.

Considered an oddity when it was released, it still has that reputation today. But there's some fascination in seeing Hollywood pros do their take on a World Cinema classic, and James Wong Howe's Deliberately Monochrome cinematography gives a chilling look to the Arizona scenery.

Along with most of the tropes also featured in Rashomon, The Outrage contains examples of: