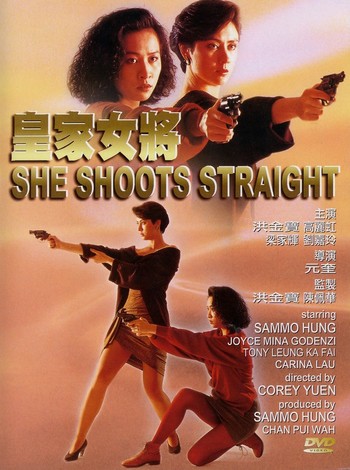 Because She Shoots Straight, Kicks Ass, Punches Hard and Take Names would be too much on-the-nose, wouldn't it?
Advertisement:

She Shoots Straight is a 1990 Hong Kong Martial Arts Movie directed by Corey Yuen, starring Joyce Godenzi (of Eastern Condors fame), Carina Lau and Sammo Hung in a supporting role. It's one of the many Girls with Guns films spawned in Hong Kong at the start of the early 90s, although unlike the Iron Angels movies its somewhat more grounded in reality.

Inspector Mina (Joyce Godenzi) is the Eurasian wife of Inspector Huang (Tony Leung Ka-fai), a decorated member of the Hong Kong police and recently promoted to Lieutenant. For Officer Ling (Carina Lau), Huang's sister, Mina's promotion only fuels the fire of dissatisfaction between Mina and Huang's several sisters, considering their presence in the force being longer than hers. What's NOT helping is the arrival of a Vietnamese crime ring in Hong Kong, who have a personal vendetta against Inspector Huang and his family over the death of one of their members.

Sammo Hung would later marry Joyce Godenzi in real life, five years after this movie was made. Good call, Sammo!