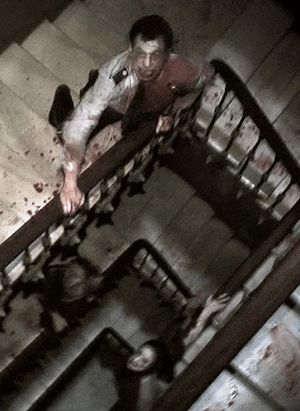 May the upper floors be safer than the lower ones.
Advertisement:

A Cinematography trope. A Pursued Protagonist is being chased up (less often, down) a stairwell. As they run up the camera "floats" upwards and we see the hero and his adversaries as they spiral upwards, or may well descend to show all the pursuers. The hero and the pursuers will look up and down at each other at least once before setting off running.

This works as a means to establish claustrophobia and vertigo, as the hero is fleeing in close quarters and essentially going in circles. This can be accomplished by having the camera on the opposite bank and move up/down, or using a harness and crane to move the camera and operator

As the hero is likely to "tree" himself at the top of the stairs, see also Climbing Climax. Compare Ending by Ascending.