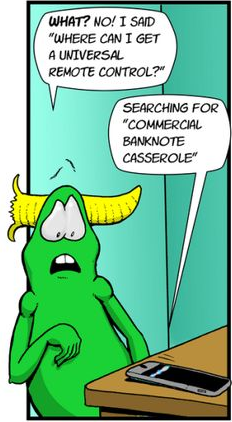 Any time a character tries to get help from a virtual assistant or other voice activated device, the computer will always misunderstand the command and Hilarity Ensues. This could be due to the character having a difficult to understand accent, a Speech Impediment, or bad acoustics. Alternatively, the virtual assistant could just not be very advanced. Often times, the assistant will hear the words correctly, but will misunderstand the meaning or else they will take the command too literally. Sometimes it will mistake something not meant as a command as a command. One common outcome is for the virtual assistant to play an annoying or inappropriate song with lyrics that are similar to the requested command.

Alternately, the virtual assistant could mistake an intended command for a message and generate a text-to-speech transcription, in a variation of Reading the Stage Directions Out Loud.

Another variant is for a character to call an automated hotline that requires vocal responses, which causes its own set of problems.

With voice-activated smart phones and virtual assistants becoming more common in the real world, this is very much Truth in Television. Sister Trope of Auto-Incorrect, where an autocorrect or speech-to-text program supplies the wrong word. Compare Overly Literal Transcription.