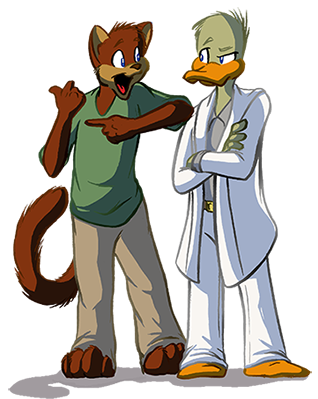 Left to right: Peter and Seth.
"What if to a child, what appeared to be an imaginary friend, was in fact his guardian angel?"
Advertisement:

is a semi-autobiographical furry webcomic by artist Jonathan Ponikvar. The first strip is dated January 1, 2005, and has 170 pages in its archive as of December 2011.

The story revolves around Peter, a 12-year-old cat who is having a difficult time surviving through childhood. One day he makes a new friend in the form of Seth, a white-suited duck. Peter quickly realizes that Seth is only visible to him

, providing the backdrop for the rest of the story. Seth follows Peter around in order to offer him advice and guidance through the various plotlines. There are other children who have special friends in the world as well, and each of them can see the others' companions and even talk to them. Seth and the rest are referred to only as "Guardians," leaving the theological undertones up to the interpretation of the viewer.

Other main characters in the comic include Iggy, a simple-minded gecko who is Peter's only non-Guardian friend; Skin, a snake, and Iggy's Guardian; Chelsea, a bear who is the main antagonist in the comic and Peter's primary bully; Ezzy, Peter's sister, a tomboy-ish calico cat who thinks the Guardians are "ghosts" haunting their home; the Worms, a sub-set of Guardians who are troublemakers and thrive on chaos; and Whitney, Peter's main crush and love interest, who is actually directly based on the artist's real-life wife of the same name.

The first 75 strips of the archives are presented in a four-panel newspaper format. After that point it changes to a full-page comic with varying panel layouts. A few comics are also in color, which are presented as bonuses for donations made by the readers.

The comic also has a sequel called Peter And Whitney which skips ahead to the characters in their college days after the guardians have left them.