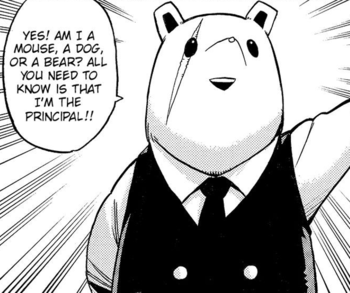 Wait, you mean you're not a badger?
GameLand: And what do you think, how many gamers now understand that Sonic is a hedgehog?
Naka: No, not all of them. In Japan he's taken for a cat very frequently. It's easier for Americans — reference to hedgehogs exist right in the title of the game, so the "hedgehogness" of Sonic is a given to them. But French and German people, for example, are trying to see some other animals in him as well.
— Yuji Naka on Sonic the Hedgehog
Advertisement:

This is an Audience Reaction. Informed Species if intentional, I Am Not Weasel if in-universe, and Cartoon Creature if it's not even supposed to be recognized.