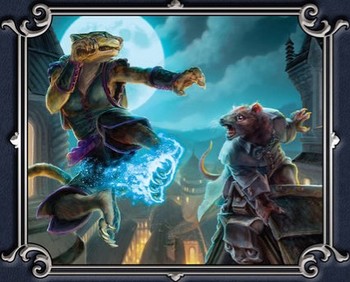 Monarchies of Mau is a roleplaying game published in 2018 by Onyx Path Publishing with Pugsteady. Like its sister game Pugmire it takes place in a distant future where humanity has mysteriously disappeared, leaving a variety of Uplifted Animals to fill the void they left behind. In this case, the game focuses on the cats of the titular Monarchies of Mau amid their rivalry with the dog kingdom of Pugmire and their own inter-house scheming.
Advertisement:

The rule system is heavily influenced by Dungeons & Dragons 5th edition, with the six major houses (plus the up-and-coming Shadow Bloc) acting like "races" and six "callings" (like Mancers who study human relics to claim their power for their own, Champions who defend their house's honor with sword in paw, and sneaky little Footpads dedicated to ferreting out secrets) filling in for classes. Stories can involve good-old-fashioned dungeon delving and protecting the weak from monsters, but there's a distinct emphasis on noble intrigue here.

Tropes found in Monarchies of Mau include: