King Arthur
The central character of the myth, The Good King of Camelot, pupil of Merlin, husband of Guinevere, and founder of the Knights of the Round.
Merlin
A wizard who serves as Arthur's adviser and mentor.
Guinevere 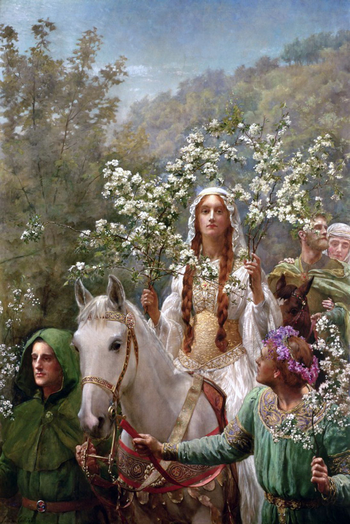 Arthur's wife and Queen of Camelot. Like many characters in the myths, her origin and characterization varies, and she vacillates from a traitorous monarch to a noble and virtuous lady Depending on the Writer. In popular reinterpretations of the myth, her tragic affair with Lancelot is one of many factors that ultimately lead to Camelot's downfall.

Advertisement:
Taliesin
A Brythonic poet in Roman Briton who became a major Welsh cultural hero. He appears from time to time in Arthurian stories as the King's personal Bard in Arthur's Court.

Knights of the Round Table

Lancelot
A late addition to the Arthurian mythos, but nonetheless one of its most iconic characters. Lancelot du Lac is usually portrayed as one of the Round Table's greatest warriors and King Arthur's steadfast brother-in-arms. Lancelot is a notable knight errant and accomplishes many feats, but his affair with Queen Guinevere ultimately proves tragic.
Gawain
The son of King Lot of Orkney and Arthur's half-sister Morgause, making him King Arthur's nephew and older brother to Agravaine, Gaheris, and Gareth.
Agravaine
Gawain's brother and another of King Arthur's nephews. Unlike his heroic brothers, Agravaine is more outwardly malicious, and is usually portrayed as one of the knights who betrays Arthur in the end.
Advertisement:
Gareth
Gaheris
Percival
Geraint/Erec
Galahad
The illegitimate son of Lancelot and Elaine of Corbenic, who was disguised as Guinevere. Prophesied to surpass his father in greatness, Galahad is a peerless warrior. He is best known for being one of the Grail Knights alongside Percival and Bors and the purest of all of them.
Bors
Kay
Arthur's stepbrother and seneschal.
Bedivere
Mordred
Palomides
Segwarides
Safir
Marrok
Dagonet
King Arthur's Fool.
Dinadan
"'Madam,' said Dinadan, 'I marvel of Sir Tristram and other lovers, what aileth them to be so mad and so sotted upon women.'
"'Why,' said La Belle Isoud, 'are ye a knight and be no lover?'
"'Nay,' said Sir Dinadan, 'for the joy of love is too short, and the sorrow thereof, and what cometh thereof, dureth over long.'
Ywain
Aglovale
A son of King Pellinore and one of the brothers of the hero Percival.
Alexander the Orphan
Appears in Palamedes, Prose Tristan, Prophecies of Merlin, and Le Morte d'Arthur.
Tristan
While there are a few mentions of him in early Celtic Arthurian material, he is best defined by his tragic romance with the lady Iseult — which might have started as a separate story that later authors incorporated into the wider Arthurian mythos.
Lamorak
Tor
Ironside
Morien
Lucan
Sagramore
Pelleas
Galehaut
A half-giant knight that became subservient to Arthur after giving up on waging war against him for the sake of Lancelot.

Morgause
Morgan(a) Le Fay
Nimue/Nyneve/Viviane/The Lady of the Lake
Iseult the Fair
Iseult of the White Hands
Ettard of Arroy
Igraine
The mother of King Arthur and wife of Uther Pendragon. She was originally the wife of Gorlois, the Duke of Cornwall, and married Uther after her first husband's death. Igraine is also often depicted as the mother of Morgause, Morgan le Fay and Elaine of Garlot (in most versions her daughters are from her first marriage).

Two brother Kings of Britain said to have led the Celtic sacking of Rome in 390 B.C.
Brutus of Troy
According to Geoffrey of Monmouth and subsequent authors, a Trojan exile who led a band of followers and conquered Britain from a race of giants. Britain was supposedly named after him.
Culhwch
Arthur's cousin from the Welsh tale of Culhwch and Olwen.
Ector
The father of Kay and foster father of Arthur.
Hengist & Horsa
The pair of brothers who, according to legend, began the Anglo-Saxon invasions that transformed a decent chunk of Great Britain into England. Sometimes identified as Angles or Jutes instead of Saxons, but then the Britons (and Scots and Irish) tended to lump all the Germanic invaders together under "Saxon".
Rowena
The beautiful daughter of Hengist who became the wife of Vortigern. This gave Hengist some claim on the British throne.
Cerdic
One of the first Saxon leaders.
Osla Big-Knife
One of Arthur's companions in the tale of Culhwch and Olwen.
The Black Knight
The Green Knight