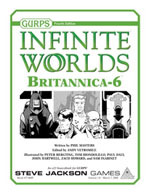 ...But I’m sure you’ve all guessed that the added towers are unusual. Officially, they’re used for astronomical observations, but given the atmospheric conditions and light pollution over there, we have our doubts. Actually, we think that they house anti-airship weapons of some kind, but we don’t have very good intel assets in place yet on the timeline, so we can’t be sure. The odds are that whatever is in them makes a dramatic sound and light show when it’s activated; it might or might not really be any good for shooting down airships...
— From an Infinity mission briefing quoted in the book.
Advertisement:

GURPS Infinite Worlds: Britannica-6 is a 70-page setting/worldbook supplement for GURPS 4th edition by Phil Masters; as the full title indicates, the world it describes fits into the Infinite Worlds crosstime-adventuring framework, and "Britannica-6" was originally mentioned in passing in the main Infinite Worlds book. The "Britannica" label indicates a timeline in which Britain is the dominant world power.

On Britannica-6, Princess Charlotte, daughter of King George IV, survived the difficult childbirth which killed her (and her child) in 1817 on our world, leading to historical ripple effects which meant that Queen Victoria was never born, and a more brash, Georgian culture survived instead of being replaced by Victorian staidness. The year is 1887, and the British Empire is dominated by a sprawling royal and aristocratic class, the "Bloods", who love using advanced technology to show off, settle their quarrels, and provide them with things to wager on. The book is sold in PDF form; the publishers have a Web page for it here.