Literature / The Cats of Seroster 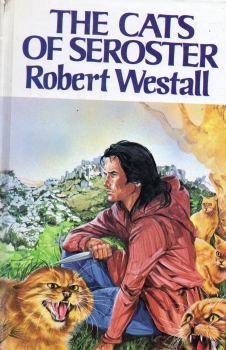 The Cats of Seroster is a 1984 medieval fantasy novel by English author Robert Westall.

Set in a fictionalised version of 16th Century France, the book follows the events in an unnamed city after the ruling Duke is assassinated by conspirators within his own nobility. Opening with the assassination itself, which occurs during the Duke's dinner with his young son, the book moves quickly to add its fantastic elements, as the heir to the duchy is rescued by the royal cat and taken into hiding in the abandoned city mausoleum. The cats of the city, divided into two socio-racial groups, hold a great meeting to decide how they should react to the human events; deciding that one of their number must be sent to tell their ancient friend, Horse, the news. The two groups of felines are the Miw, much larger and stronger felines than the Brethren, the ordinary domestic cats. Miw are also blessed with Psychic Powers, including intra-feline telepathy and the ability to project emotions into the minds of humans. Brethren can send and receive thought between each other and Miw, but lack the powers to communicate more directly with humans.

The story then moves between two protagonists; one human, one animal. Cam of Cambridge, a lapsed student from the University of Paris and itinerant peddler, tinker and solver of problems is wandering the south of France seeking the next village where he can ply his various trades of writing letters, fixing pots and dowsing for wells. Amon, the reluctant young Miw selected to travel from the city and find Horse; along with his Brethren accomplices Ripfur and Tornear. Cam becomes embroiled in events by accident, accepting a letter to "The Seroster" from a local blacksmith, along with an aged knife, which he must deliver to the unnamed city. Along his way to his destination, he finds and befriends Amon and accidentally rescues a damsel and her father from one of the conspirators. He rapidly finds himself up to his neck in more magic and politics than he ever wanted or planned to be involved in as the Miw orchestrate a human rebellion against the new ruler of the city, Little Paul, and conduct their own guerilla war from the sewers and rooftops.

But who is the Seroster?