Fanfic / My Hostage, Not Yours 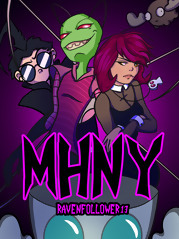 "These two are assholes, but rather then turn them into these fake, altered, lovable characters people normally portray them as, I decided to just run with their regular attitudes. Clearly, and while this is in no way meant to be rude or insulting, you prefer the latter and I respect that, but that isn't how I'm writing them."
— The author in response to a review, referring to the main couple.
Advertisement:

My Hostage, Not Yours is a series of Invader Zim stories on FanFiction.Net by RavenFollower13

is set several years after the events of the canonical series, and Zim's official banishment to Earth, with the characters (the human ones, anyway) now teenagers and in High Skool. The plot kicks off when Gaz discovers a crashed Irken ship and becomes attached (literally) to an Irken device called a LEECHY. Zim forces her to keep it secret while he tries to find a way to remove it, for her own safety. However, as an old enemy of the Irkens' conspires to take the LEECHY by force, Zim and Gaz find themselves growing closer.

The second story, My Hostage, Not Yours 2: The Revenge of Player 2

, takes place seven months later: Gaz and Zim are officially a couple, and Zim and Dib are more or less friends. However, their peace is shattered when a hitman nearly kills Dib. Iggins, Gaz's onetime rival, is back for revenge, and he plans on making her suffer by going through her loved ones. But he may have underestimated Gaz — and how far Zim will go to protect her.

The third (and final) story, My Hostage, Not Yours 3: The Inevitable Takeover

, skips ahead about another year-and-a-half. When Zim discovers that he only has three months to conquer Earth or die, Gaz convinces him to finally get to work and take over. But Dib isn't going to go down without a fight. Victory may be easy, but keeping that victory may be much, much harder.

The series is highly regarded by its readers, in no small part due to being able to keep the personalities of the characters nearly identical to that of the canon, providing a well written example of a popular pairing, a writing style that leaves you wanting more, and of course, its fast and consistent updates.

In February 2021, RavenFollower13 announced plans to reboot and rewrite the series, which started in April of that year with the publication of Re: My Hostage, Not Yours.