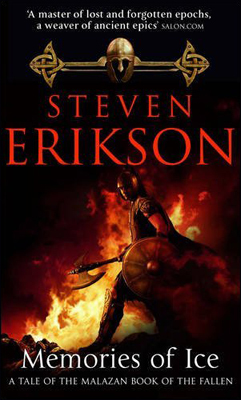 "The harder the world, the fiercer the honor."
—Dancer
Advertisement:

Memories of Ice is the third book of ten in Malazan Book of the Fallen, and the second in the Genabackis arc, picking up from Gardens of the Moon. It was released in 2001, and is preceded by Deadhouse Gates, which the story is concurrent with.

Over a hundred thousand years ago, High King Kallor decided to destroy his empire out of petulance. Most of an entire continent was wiped out and left completely barren by his magic, and the empire was completely broken. Afterwards, three Elder Gods appeared before him. They healed the land and cursed him for his crime: he would always see his efforts crumble into nothing. Kallor laughed, and cursed them right back.

In the present time, Toc the Younger suddenly finds himself thrown out of the Warren of Chaos—where he was sent to die by the insane wizard Hairlock—into the land of Morn, a vast wasteland created by an ancient cataclysm. Lady Envy, a sorceress, happens to be nearby and inducts him into her entourage. Along the way the pick up Tool, the lone T'lan Imass last seen with Adjunct Lorn.

One-Arm's Host has defected from the Malazan Empire and has allied itself with the city-states of southern Genabackis following Adjunct Lorn's attack on Darujhistan and the news that a new threat is approaching from the south: the Pannion Domin, a fanatical empire far to the south, has suddenly marched with an immense army against its neighbours. Reports indicate that something is amiss: the army seems to be composed mostly of civilians, including children, and the lands in their wake are completely abandoned and stripped of everything edible. The Domin seems to be heading for Capustan next, and the allied forces scramble to reach the city before it is too late.

In Capustan, the ruling body is desperately preparing to defend their city as the Pannion Domin are mere weeks away. The Grey Swords, a mercenary company dedicated to the war god Fener, have agreed to help defend the city — but time is short, and there seems to be no hope of relief. Outside the city, Gruntle's group of caravan guards, oblivious to the encroaching threat, accept a job to escort the eccentric pair known as Bauchelain and Korbal Broach to Capustan.

Amongst the Rhivi, a sacred Mhybe has appeared. Tattersail's dying spirit entered the foetus in a woman's womb, and nine months later a strange child was born. The child, known as Silverfox, grows unnaturally quickly at the expense of the vitality of the Mhybe, and she seems to have a special connection to the undead people known as the T'lan Imass, who 320,000 years ago forsook their mortality to ensure the extinction of the Jaghut, their mortal enemies.

Followed by House of Chains.

Memories of Ice provides examples of the following tropes: