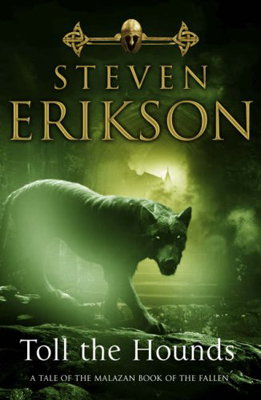 'If we are to live, we must take risks. Else our lives become deaths in all but name. There is no struggle too vast, no odds too overwhelming, for even should we fail – should we fall – we will know that we have lived.'
— Anomander Rake
Advertisement:

Toll the Hounds is the eighth book of ten in the Malazan Book of the Fallen, following Reaper's Gale. It is the last book in the Genabackis arc and revolves around the fates of the characters in Darujhistan and Black Coral, most of which have been last seen in Memories of Ice.

The retired Bridgeburners who now own K'rul's Bar are targeted by the Assassin's Guild and find themselves fighting for their lives once more. Darujhistan's Cabal of Mages, however, prepares for a much more pressing battle: vast powers are bound for the City of Blue Fire and their convergence is threatening to tear everything apart.

After a journey across half the known world, a group of six young Tiste Andii exiles make their way towards the city of Black Coral, where the Son of Darkness now resides. Their path is not an easy one, though, as they come across a desolate village in the grasp of the cult of the Dying God and the addictive substance known as saemankelyk.

In Black Coral, a brutal conflict is brewing. Outside the city gates a new cult is worshipping the Redeemer — a very young deity devoted to salvation. But the Redeemer's temple is as yet unbuilt and it's worshippers have no means to defend against the Dying God's rival cult creeping up from the south, whose ambitions are as sinister as they are deadly.

Inside the city itself eternal Night now reigns and the Tiste Andii keep to themselves and still mourn the loss of their home. They seem oblivious to the threat on their doorstep and even the Son of Darkness has seemingly other things on his mind.

To the south a great warrior is swept ashore and he has one goal: to kill Death itself.

Followed by Dust of Dreams.

Toll the Hounds provides examples of the following tropes: