Literature / Gardens of the Moon 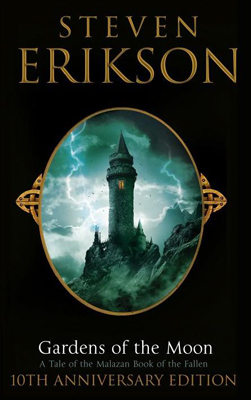 'Every decision you make can change the world. The best life is the one the gods don't notice. You want to live free, boy, live quietly.'
— Sergeant Whiskeyjack
Advertisement:

Gardens of the Moon is the first book of ten in Malazan Book of the Fallen, and the first in the Genabackis arc. It was released in 1999, and at just over 200,000 words, it is by far the shortest novel in the main sequence — although still a Doorstopper by any definition.

Though still young, the Malazan Empire is already rife with conspiracy. The Emperor and his right-hand man, Dancer, have been assassinated by Clawmaster Surly, the head of the Claw. Surly ascends to the throne as Empress Laseen, from which she maintains the Empire's expansionist policies.

Years later, the siege of Pale is reaching its conclusion on the continent of Genabackis. The city has held out for three years thanks to its high mage population and the help of the otherworldly Tiste Andii, their leader — the Ascendant known as Anomander Rake—and their enigmatic floating fortress, Moon's Spawn. In a costly climactic battle, the Malazans manage to damage and drive off Moon's Spawn and claim victory. The Bridgeburners, a legendary military company, are almost wiped out to a man, and their unofficial leader, Sergeant Whiskeyjack, learns that they may have been betrayed by high-ranking officials.

Laseen's lust for power is great, however, and the Bridgeburners reluctantly find themselves sent to the city-state of Darujhistan, where they will attempt to soften up defences in the event that the city can not be persuaded to join the Empire. Joining them is the young and naïve Captain Ganoes Paran, who remains unaware of the Bridgeburners' intolerance towards poor officers. The Empire is not the only force with its eyes on Darujhistan, however, as most of its enemies seem to be gathering there.

In Darujhistan, a young thief named Crokus Younghand finds himself drawn into more intrigue than he ever expected; elsewhere, Adjunct Lorn, second only to the Empress, travels towards the city with a plan in mind; and in the shadows, the gods manipulate events to their liking.

Gardens of the Moon provides examples of the following tropes: