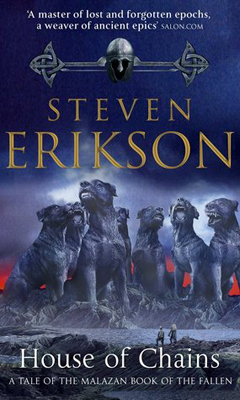 'Dryjhna was an author who, to be gracious, lived with malnourished talent. There are naught but bones in this tome, I am afraid. Obsessed with the taking of life, the annihilation of order. Yet not once does he offer anything in its stead. There is no rebirth among the ashes of his vision, and that saddens me. Does it sadden you, Toblakai?'
— Sha'ik Reborn
Advertisement:

House of Chains is the fourth book of ten in Malazan Book of the Fallen, and the second in the Seven Cities arc. It was released in 2002, and is preceded by Memories of Ice.

Karsa Orlong is a proud young Teblor, and has grown up listening to the tales of his grandfather. He has heard of daring raids on other villages, where the menfolk were slain and the women raped, as is right of the strong. He has heard of how the tiny children of the lowlands are weak and deserve only to be attacked, for such is the duty and right of the strong, and he has heard of the plunder and glory one such raid might bring him. Against his foolish father's wishes, he sets out on such a raid with his two closest companions, a bloodwood sword and a supply of blood-oil to keep it sharp with — but while the Teblor Karsa is a mere pup at eighty years of age, to civilization such a period of time is enough for mighty empires to rise.

Years later, the newly-appointed Adjunct to Empress Laseen, Tavore Paran, arrives in the Seven Cities with the 14th Malazan Army. Following the Chain of Dogs, the Army of the Apocalypse has withdrawn to the center of Holy Desert Raraku, where Sha'ik Reborn is gathering her forces in the ancient city at the center of the Whirlwind. Despite consisting almost entirely of fresh recruits, the Adjunct orders the 14th to march in pursuit of the veteran Dogslayers and towards the center of Raraku.

Ganoes Paran, now Master of the Deck, realises that the Crippled God is seeking to gain recognition as a god in the Deck of Dragons, and as its Master, it is Ganoes' decision whether such a terrible god may gain recognition; a young man named Cutter is sailing on a small skiff to a legendary island to do the bidding of Shadowthrone; and on a distant shore on the edge of a broken realm, an oddly solitary T'lan Imass comes upon a man with a shaved head who was exiled and left to die by a people thought myth.

House of Chains provides examples of the following tropes: