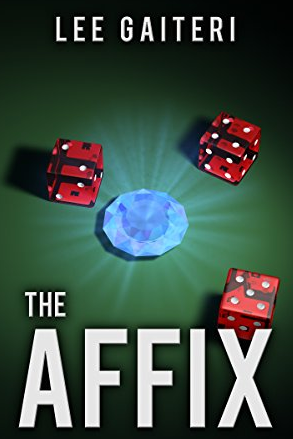 The Affix is a comedic paranormal thriller novel by Lee Gaiteri, the first in the Paranormal Curio series.
Advertisement:

A gem that bends probability like a pretzel and glows in the dark latches onto a man who just wants to get on with his hard-earned weekend. Matt Kellogg, its reluctant "keeper", tries to protect his friends (and his stalker ex-girlfiend) as hordes of dangerous people come out of the woodwork to claim the jewel. Every attempt to get rid of it fails and just makes things worse, forcing Matt to dodge constantly from one danger into another.

The longer Matt spends in the gem's company, the faster everything around him falls apart. Chaos ensues. Even worse, order ensues.

The series continues with The Well of Moments.

The Affix contains examples of: