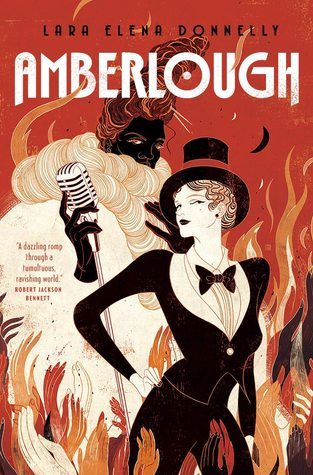 Trust no one with anything
Advertisement:

But not everyone agrees with the Ospies' philosophy, including master spy Cyril DePaul and his lover Aristide Makricosta, smuggler and emcee at the popular Bumble Bee Cabaret. When Cyril's cover is blown on a mission, however, he must become a turncoat in exchange for his life. Returning to Amberlough under the Ospies' watchful eye, Cyril enters a complex game of deception. One of his concerns is safeguarding Aristide, who refuses to let anyone—the crooked city police or the homophobic Ospies—dictate his life.

Enter streetwise Cordelia Lehane, top dancer at the Bee and Aristide’s runner, who could be the key to Cyril’s plans—if she can be trusted. As the twinkling lights of nightclub marquees yield to the rising flames of a fascist revolution, these three will struggle to survive using whatever means—and people—necessary. Including each other.

Often described as Cabaret meets James Bond, Amberlough is set in a world the is not unlike our own, closely mirroring the hedonistic paradise of 1930's Berlin. The debut novel by American author Lara Elena Donnelly, it is stuffed full of Art Deco style, deception, brutality, romance, intrigue, and the steadily creeping rise of fascism that will be all too familiar. Amberlough is both a fun and dazzling world, and a glimpse into the glittering and a terrifying world of spies, strippers, and government takeovers.

Amberlough is the first in a 3 part series, named 'The Amberlough Dossier'. Amberlough, the 1st in the series, was published February 7th 2017. The second book in the series, Armistice, was released on May 15th of 2018. The 3rd book, Amnesty, is expected to be published in 2019