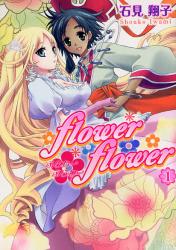 Princess Nina of Adingala has arrived to the country of Shinka in order to marry a member of royalty there. There are two princes: Sei and Shu. However, Sei happens to have a hobby that Nina does not like; instead, she settles for the younger prince Shu. However, Shu turns out to be female.

For poor Shu, things soon become quite complicated. Nina happens to be a Type A Tsundere who seems to take pleasure in bullying her and shows her tsun side more than her dere side. However, Shu is determined to make things work between the two of them, though it's only a matter of time before Nina finds out that the "prince" she's betrothed to is really a "princess."

Flower Flower is a manga by Shoko Iwami, the mangaka who drew the Yonkoma Kanamemo. It was serialized in Yuri Hime S.