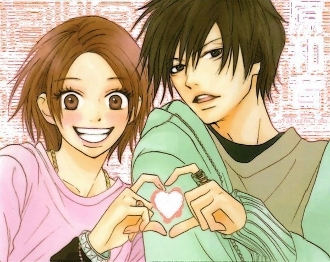 Haruna Nagishima focused heavily on playing softball all through middle school, but her love of shojo manga led her to wanting a romance of her own come high school. However, given her total lack of attention to style and flirting situations up until high school, she's an utter train wreck in trying to find a guy. Her best friend, Mami, points out that when she had similar problems in softball, she got better via advice from a coach. Haruna, instantly seeing the wisdom in this, thinks immediately of the perfect guy to ask, one who helped with her shoe when it broke the other day.

Enter Yoh Komiyama. A Deadpan Snarker that all the girls watch from a distance, he is said by everyone close to him to know what style works for anyone. He's like a Japanese schoolboy Simon Cowell, with the addition that girls just typically annoy him. Haruna's insistence wins him over, and he agrees to coach her on one condition: she can't fall in love with him.

Just how long do you think that will last?

A shoujo manga by Kazune Kawahara (who would later write My Love Story!!), the series ran in Bessatsu Margaret from 2003 to 2008. A live-action film adaptation was released on April 1, 2011.