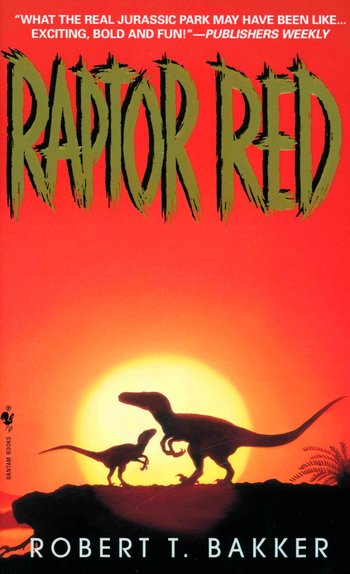 "In her own brain the raptor identifies herself with the symbols she learned as a chick: me... raptor... red. We can call her Raptor Red, because that's how she labels herself in her own mental imagery."
Advertisement:

Raptor Red is the story of a young female Utahraptor by paleontologist Robert T. Bakker, who served as one of the fact-checkers for the film version of Jurassic Park. It was written as a sort of companion novel to his non-fiction book The Dinosaur Heresies, in which he exposed his then-revolutionary ideas about dinosaurs being a little more active and birdlike than the popular imagination's vision of them as big, stupid lizards. It's written as a kind of nature documentary that allows some insight into the animals' thoughts.

Raptor Red and her kin may or may not be sapient, but they definitely aren't human; they're much more olfactory creatures, and communicate in birdlike calls and gestures. Even Raptor Red's "name" is a Translation Convention - she attaches the concepts of "raptor" and "red" (for her species' red snout-markings, as opposed to the yellow snouts of a rival Utahraptor species) to her concept of "myself". The other major characters are either 'named' in relation to Raptor Red or by their species, like with the ancient white dactyl who considers Raptor Red's pack as the moving centre of his territory.

The novel follows an eventful year in Raptor Red's life; the times are changing (the book takes place around the Jurassic/Cretaceous boundary) and various dinosaurs are on the move, among them Raptor Red and her mate, who have come to what will one day be Utah from what will one day be Asia via land bridge. He dies in a hunting accident in the first chapter; not long after, Raptor Red reunites with her sister and finds that her sister has three chicks. Since the chicks are "half of half of me", Raptor Red forms a two-raptor pack with her sister to help raise the offspring. The ensuing adventures include famine, flood, a dashing young male attempting to court Raptor Red over her sister's protests, menacing Acrocanthosaurs, a very nasty run-in with a whip-tailed sauropod, and lots and lots of random paleontology.