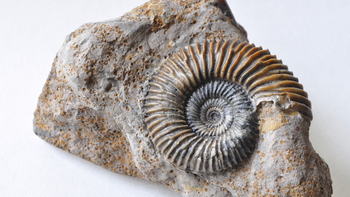 This page is all about prehistoric life

, listing many species of extinct creatures, from plants to non-human hominins. Of course dinosaurs receive more details than the other groups, but it would be a really, really incomplete list without non-dinosaurs.

Important: This page is only about non-stock animals: that is, creatures that may appear in popular-science works but have never been portrayed in film, comics, or novels, or at least, have been portrayed only occasionally. The vast majority of dinosaurs

are in this category, yet they are just as cool as their more famous relatives. If you want to read about the most popular extinct animals, dinosaurs and otherwise, there is already good information here and here.

The geologic and biological history of the Earth is divided into four eons: the Hadean, Archean, Proterozoic, and Phanerozoic. Each eon is divided into eras, which are themselves subdivided into periods, which are in turn infradivided into epochs. Since we know a heck of a lot more about the recent past than we do about the very very ancient past,note only the most recent eon contains macroscopic life of any kind, hence the name “Phanerozoic” meaning “visible life” the first three eons are sometimes grouped together into a single “supereon” known simply as the Precambrian.

PRECAMBRIAN: Earth before 542 million years ago.

CENOZOIC ERA: Earth from 66 million years ago to the present day.

The first written records began to appear some 5000 years ago, which marked the beginning of recorded history. Anything more recent than that ain’t prehistoric.

When reading the examples, you’ll notice that you can place many prehistoric critters into their correct groups with much confidence simply by observing their hallmark suffixes. But also note that not all members of each group have their designated suffix; nor are these suffixes necessarily exclusive of these groups (think about the whale Basilosaurus). Usually these suffixes are Latinized Greek, but there are many examples from languages other than Latin and Greek, such as Yutyrannusnote Yu is Mandarin for “feathered dragon”, Azhdarchonote named after a creature of Iranian mythology, Tawanote named for the Hopi sun god, and Yinote Yi is Chinese for "wing". Perhaps the most famous example of them is Quetzalcoatlusnote From Quetzalcoatl, the giant Aztec feathered snake. Some names are even English: Drinkernote for nineteenth-century paleontologist Edward Drinker Cope, Dreadnoughtus note from a gigantic warship of the past, the Dreadnought. Some names come from modern geography: Mosasaurusnote The Meuse River in Europe: its jaws were found nearby, Edmontosaurus, Albertosaurusnote Edmonton, Alberta, Canada, Lesothosaurusnote Lesotho, a mini-state of Southern Africa, Mamenchisaurus, Tuojiangosaurusnote Ma-Men-Chi and Tuo-Jiang are two localities of China, Saltasaurus, Riojasaurusnote Salta and La Rioja, the two provinces of Argentina that have given their remains, Minmi, Muttaburrasaurusnote Minmi Crossing and Muttaburra, the places in Australia where their fossils were dug out, Lisowicianote Lisowice, a village in Poland near its fossil site. Others come from Real Life people's names: Andrewsarchusnote early-twentieth-century paleontologist Roy Chapman Andrews. Othnielosaurus note famous nineteenth-century dinosaur-hunter Othniel Charles Marsh, the Cope's archrival within the "Bone Wars", Herrerasaurus, Alvarezsaurusnote Herrera and Alvarez are two common surnames in the hispanic-speaking world, Scipionyxnote "Scipio's claw" because was found in Italy, the place of the original Roman Empire, Leaellynasauranote named after its discoverers' daughter Leaellyn, Avaceratopsnote named after its describer's wife, Ava, Inostrancevianote named in honour of the geologist Aleksandr Inostrantsev.

There also suffixes that do not indicate a specific groups of animals, but mark anatomical traits instead:

Common prefixes or suffixes that function as adjectives:

And oh, don’t forget these: