Adored By The Network / SpongeBob SquarePants 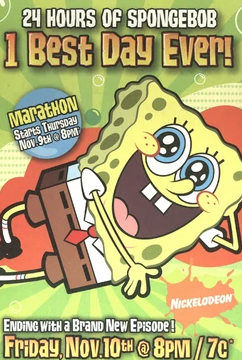 SpongeBob SquarePants was pretty much the poster-child for this trope (at least until Teen Titans Go! stole the sponge's thunder in 2015). Since the show began airing post-movie seasons in 2005, it would run at least eight times on an average weekday. It would often be the first thing they show in the morning and the last thing they show at night (before turning into Nick @ Nite), and it's the only show that they run at all different hours of the day to get pre-schoolers, after-school kids, and evening teenager audiences. "Special" SpongeBob episodes would be hyped up and promoted more often than the regular Nicktoons on the network. Some days, it'd get more airtime than all the other Nicktoons still on Nickelodeon combined. At least during 2009-2011, even repeats got higher ratings than the average that most kids' shows, as well as several primetime shows, got back then. Thus it wound up becoming the highest rated children's television show for over a decade. The fact that merchandise sales were extremely high didn't hurt much either. Eventually, ratings for the show dropped - probably due to overexposure and what many fans would consider Seasonal Rot, at which point Nickelodeon attempted to restore some variety to the schedule, but by this point, the damage had been done, as The Loud House, itself now a noteworthy recipient of this treatment, was the only Nicktoon to survive the yellow sponge's reign of terror, and even as Nickelodeon cleaned up its act, Cartoon Network got new management who, as mentioned above, repeated all of Nick's mistakes with Teen Titans GO!, with the exact same results. There's also the fact that cable television is declining as a whole thanks to platforms like Netflix and YouTube getting more and more attention from kids, meaning SpongeBob doesn't have the same impact it used to. Despite all this, it still remains a favorite for Nick to this day.