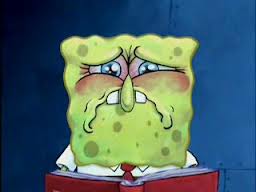 SpongeBob SquarePants, with the show still on air for many years, still brings light of tragedies under the sea.

The first two films have their own pages here:
open/close all folders

1 - Friend or Foe
2a - The Original Fry Cook
7b - Breath of Fresh Squidward
18 - What Ever Happened to SpongeBob?

3a - Mimic Madness
4b - Krusty Katering