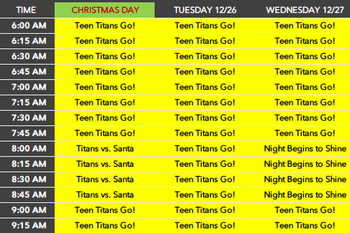 Teen Titans Go!, being the comedy half of the DC Nation lineup, fell into this rather fast and quickly became the new SpongeBob SquarePants in terms of overexposure. Unsuprisingly, this over exposure led to the series becoming one of Cartoon Network's most popular shows. By 2015, ratings were extraordinarily high, often surpassing that of Nickelodeon and Disney Channel. So of course the network went on to give it lots of attention. Later on, it became something of the default "filler" show whenever there wasn't a new episode of another series (which is quite often), or when Adult Swim wasn't on, quickly pushing other popular shows, except The Amazing World of Gumball and even that's debatable, off the schedule almost completely (resulting in a few such as Uncle Grandpa and Clarence being unceremoniously cancelled due to poor ratings, and spawning conspiracy theories that Cartoon Network was run by Moral Guardians who deliberately sabotaged any series they found inappropriate for kids by using TTG to artificially manipulate ratings to justify cancellation). During the summer of 2015, the show was practically the only thing that was played aside from what few live-action movies CN still held the rights to, new episodes of original and acquired series, The Amazing World of Gumball, and the Adult Swim block. By the end of 2018, the excessive airing of the series began to die down as its popularity waned, the show's staunchest defenders turned against it, the theatrical movie was considered a box-office disappointmentnote  the movie actually did decent for its $10 million budget making $52 million back, but Warner Bros. wanted $250 million due to the popularity of the series. Unfortunately, they released it at a time the show's popularity was waning, and Cartoon Network lost a large portion of its viewership, mainly longtime viewers and kids who switched over to either the other children's networks like Nickelodeon and Disney Channel/Disney XD, and/or websites and streaming services like YouTube, Netflix, Disney+, and HBO Max. It has been given its own page here because it is one of the most noteworthy and conspicuous examples of any TV series, animated or otherwise, being overexposed by its network.

The history of Teen Titans Go!'s status as this below is in rough chronological order unless otherwise indicated: 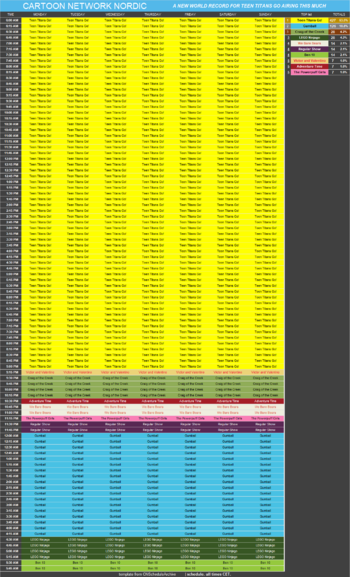 How to take the Christmas 2017 marathon on the US feed Up to Eleven.note  Courtesy of Markus Neilus