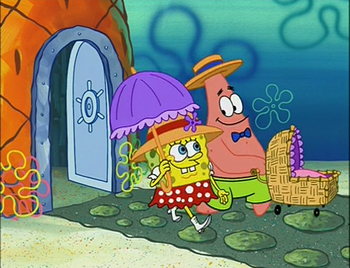 Advertisement:
open/close all folders
SpongeBob & Squidward
Squidward is SpongeBob's next-door neighbor and co-worker at the Krusty Krab. Squidward is known to absolutely hate him, though SpongeBob is oblivious to his annoyance of Squidward and usually dips into Stalker Without A Crush territory to show his affection, some moments of which take his obsession a little too far...

Later, Squidward threatens to call the cops again, implying SpongeBob has done this before.