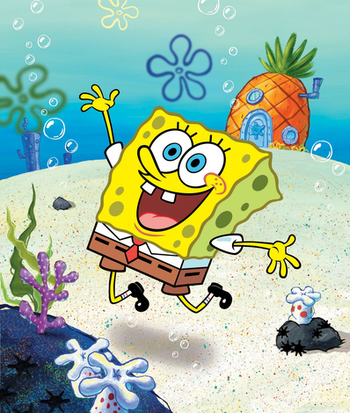 Good morning, TV Tropes and all who inhabit it! My name is SpongeBob SquarePants! I live in Bikini Bottom in a pineapple with my pet snail Gary! I also work at the Krusty Krab with my fantastic boss Mr. Krabs and my neighbor Squidward! I see you also got him on this page, too! note Squidward: NO! Don't you dare leave your page, SpongeBob! I mean, I don't leave mine!

After an amazing day at work, I go home and hang out with Patrick. We play all the time! We love blowing bubbles, playing tag, jellyfishing, and so much more! I'm also friends with Sandy Cheeks, and we love to play karate, or should I say, KA-RA-TAY! She's so sweet and kind. All of my friends are so sweet and kind! I also love feeding my pet snail, Gary. Gary's also one of my best friends, even if he can't talk.

BUT THAT'S NOT ALL! On land, you weird-looking humans turned my adventures into a cartoon on Nickelodeon (I really love those!) AND I'M THE STAR! Even though I'm not a starfish. But I don't really like bragging. And of course, if you're reading this page, you should read it in Tom Kenny's voice, or for Spanish-speaking users, Luis Carreño!

T is for Tropes that apply to me-ee!

Well, that's about all you need to know about me! Thank you so much for reading and be sure to visit Squidward's page when and if you have any spare time! Now if you'll excuse me, I gotta go and get back to work flipping those patties.