All spoilers on every Funny Moments page will be left unmarked. You Have Been Warned! 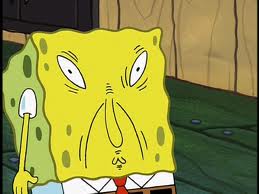 "You're using too much sauce."
Squidward: Patrick, what are you doing here?!
Patrick: Uhh... I don't know. [smiles wanly] I'm funny.
— "Suction Cup Symphony"
Being Nickelodeon's longest-running animated show ever, SpongeBob SquarePants has plenty of nautical hilarity to leave the viewers in stitches!Seasons
Advertisement: