Film / Legends of the Fall 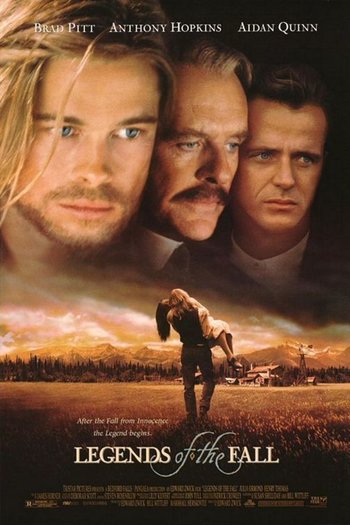 Legends of the Fall is a 1994 film based on the 1979 novel by Jim Harrison detailing the Generational Saga of the lives and loves of the Ludlow clan. The film is directed by Edward Zwick and stars Brad Pitt, Aidan Quinn, Julia Ormond, and Anthony Hopkins. John Toll won the Academy Award award that year for Best Cinematography.

The film's time frame spans the decade before World War I through the Prohibition era, and into the 1930s, ending with a brief scene set in 1963. It centers on the Ludlow family of Montana, including veteran of the Indian Wars Colonel Ludlow (Hopkins), his sons Alfred (Quinn), Tristan (Pitt) and Samuel (Henry Thomas), and object of the brothers' love, Susannah (Ormond).

Legends of the Tropes: