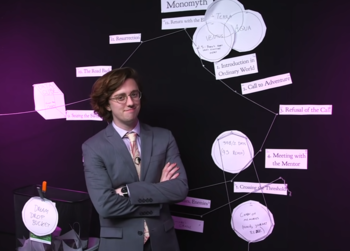 It's like Game Theory with more String Theory.note Pictured: a map of the Kingdom Hearts lore. This isn't even the entire map.
"I love The Legend of Zelda series. But the canonical timeline doesn't make any sense! Perhaps it would make more sense if someone tried to put every piece of Zelda media, canonical and non-canonical, into one timeline. Someone should try to do that."
— Brian David Gilbert, starting something he will regret
Advertisement:

Unraveled: Absurdly Comprehensive Game Lore was a comedic video essay series on Polygon, hosted by Brian David Gilbert, where he dug into (and sometimes fabricates) the lore behind some of the most beloved video game franchises, while also slowly going insane. After finishing work on Season 3 after two years of working on the series, Brian announced his departure from Polygon and an end to the series, out of a desire to move on and make new forms of content.

Episodes of the series

"I am going to throw myself into the sea."
Feedback