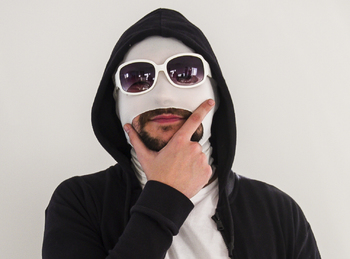 It's not who he is underneath, but what he does that defines him.
Sergio Candanedo, better known as Un Tío Blanco Hetero ("A White Straight Guy") or UTBH, is a Spanish YouTube video producer and writer. Since 2018, he's active in the field of social criticism, making vids predominantly about political correctness, feminism, gender studies and everything related. Needlessly to say, he is one of the most controversial Spanish youtubers in recent memory.
Advertisement:

A bona fide product of his time and place, UTBH started his career due to the culture wars of The New '10s and their effects in Spanish culture. His work could be considered largely a reaction against the outlook of (post)modern Spanish politics, which are perceived by many as shining examples of Political Overcorrectness at the very least. This has led pundits to label him as many nasty things, from a deliberate strawman to an outright fascist, even although he has described himself as a relative leftist bent on speaking to both ends of the spectrum.

As the pic shows, he is known by his strange, superhero-like costume, as well as his politically provoking user name.

His work contains the following tropes: