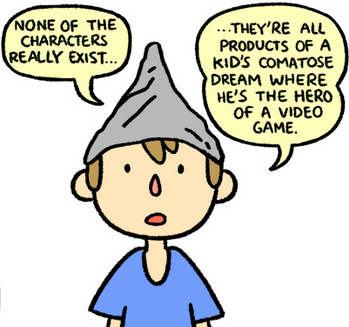 "The events of this game are absolutely, one-hundred percent canonical, unless you didn't like them. In that case it was all a dream."
— Narrator, Crash Bandicoot 4: It's About Time
Advertisement:

So, you've produced a great story with an amazing set of protagonists and memorable villains. The setting was pretty realistic, but you thought you'd spice up the narrative or add a new level of depth with some unexplained magic, cartoony antics (even if your work is itself a cartoon), sci-fi tech, spooky backdrop, or even a sudden genre shift.

As a whole, your work was well-received, and that means fan theories will start popping up about your work. However, you might notice that a few theories have one thing in common: they speculate that it was All Just a Dream, a Dying Dream, that the protagonist(s) were Dead All Along, or that everything we saw was secretly Through the Eyes of Madness. Thus, a good chunk of the plot — or maybe the entire plot — didn't actually happen.

The rule of Delusion Conclusion states that audiences will try to Hand Wave any supernatural or contradictory activity in an otherwise realistic setting by claiming said activity was exaggerated, or a hallucination experienced by the main character or narrator, even though the author of the work had no intention of that at all. These theories are often backed up by unintended coincidences, such as a small, concentrated setpiece with few or no bystanders, bystanders not reacting in a proper manner if at all, whether or not this was intentional or an oversight, the author accidentally forgetting a piece of their own story's lore and being misinterpreted as intentional, or Deus Ex Machinas and other abrupt developments that suspiciously appear a little too convenient for the protagonist even if the work never implies those events to be Too Good to Be True. Delusion Conclusions are also a common means of applying Fanon Discontinuity to any series installment, plot development, or Fan-Disliked Explanation that fans disagree with, as the above quote mentions.

Though rarely damaging to the work at all, the Delusion Conclusion is sometimes a sign that an author has left too much information out, unintentionally created an Ambiguous Situation by not properly defining the setting, or inspired a little too much doubt in the main character's sanity (deliberately or otherwise). The story setting doesn't have to be modern and/or cartoonish for this to take place, although it most commonly pops up here.

Compare with Unreliable Narrator where any ambiguity or lack of information is intentional and certain parts of the story are generally acknowledged to be true. Contrast with Killed Off for Real, where the author leaves no doubt about a character's mortal state, and both All Just a Dream and That Was Not a Dream where the setting actually is (or isn't) an illusion and is absolutely intentionally painted that way, in the end at least. Compare Maybe Magic, Maybe Mundane where a story suggests that something supernatural might have happened, but leaves the door open to realistic interpretations. When the villain gaslights the hero into thinking this is the case, see Cuckoo Nest. When the characters pretend someone else is dreaming, see Dream Deception.

See Opening a Can of Clones for when this skeptical outlook becomes so prevalent among sections of the fanbase that they stop taking anything which happens in the story seriously, and thereby lose interest in the work altogether.

A Sub-Trope of Epileptic Trees, and a common type of Stock Parody Joke.