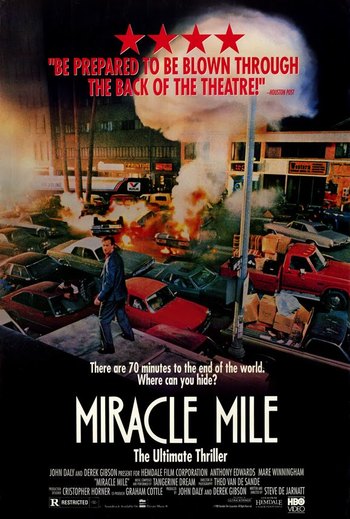 Miracle Mile is a 1988 apocalyptic thriller film written and directed by Steve De Jarnatt (Cherry 2000). The title refers to the film's setting, the Miracle Mile district of Los Angeles.

The film starts out as a romantic comedy, with Harry (Anthony Edwards), a jazz musician, and Julie (Mare Winningham), a coffee shop waitress, meeting and falling in love one afternoon. The two make plans for a date later that evening after Julie finishes work, but Harry's alarm clock fails to ring due to a power failure and he oversleeps. Waking up in the middle of the night, he races to the coffee shop, only to find that Julie has already left, so he leaves her an apologetic message on a pay phone. After he hangs up, the phone rings and Harry answers it, hoping it's Julie; instead, a panicked voice tells him that missile strikes have been ordered, and all-out nuclear war will begin within the hour.

The call turns out to be a wrong number, the caller is interrupted by someone else who tells Harry it was a joke and to forget everything he's heard, and Harry is left wondering whether the news is legitimate. The remainder of the film is spent more or less in Real Time as Harry looks for Julie, tries to confirm the news, and wonders what to do next.