Web Animation / 2 in the AM PM 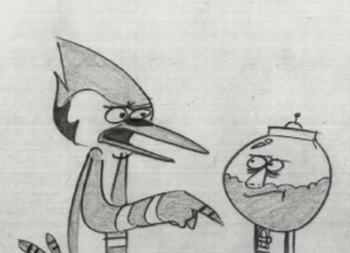 "Aw, come on, it's supposed to be fun!"
Advertisement:

2 in the AM PM is a student film by J.G. Quintel, who would go on to create Regular Show, during his time at CalArts that was leaked online as an animatic with voice acting by himself and Sam Marin. It involves two clerks (voiced by and greatly resembling Quintel and Marin in real life) working on Halloween night at an AM/PMnote an AM/PM is slang for a gas station convenience store that's open all day and all night. Quintel offers Marin a piece of candy, which unbeknownst to him contains acid (after Quintel mistakenly tells him the candy is laced with marijuana), and the two proceed to hallucinate some pretty weird stuff.

The short is notable for being the origin of the character designs of Mordecai and Benson from Regular Show. It can be viewed here

. Note that it is Not Safe for Work and plays out like Regular Show if it was a true adult cartoon instead of a kids' show that has a glut of risque jokes in it.

2 In The AM PM provides examples of the following tropes: