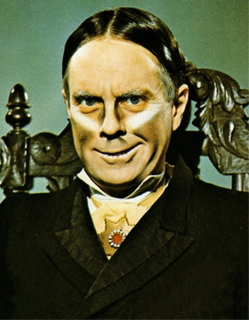 ...and good night, whatever you are!

Zacherley, neé Roland, was a Horror Host from 1957 to 1965 played by John Zacherle. A gleeful, well-dressed mad scientist operating out of a castle, Zacherley would play off a perpetually-off-screen supporting cast (including his wife Isobel) and reedit the movies he showed to give himself cameos. The character eventually made his way into other media—Zacherle edited two horror short-story anthologies and recorded a number of novelty songs with the character, as well as hosting a dance program called Disc-O-Teen (yes, also in character) and even launched a presidential campaign for Zacherley in 1960.

The character largely disappeared in the seventies, as Zacherle moved to radio to host a Progressive Rock show for the majority of the decade, but returned for a couple of anthology videocassettes in the 1980s. Zacherle also began attending horror conventions in-character in the 1990s. He "retired to Transylvania", according to his press team, a few months before his death in 2016, at the ripe old age of 98.

Tropes associated with Zacherley include: