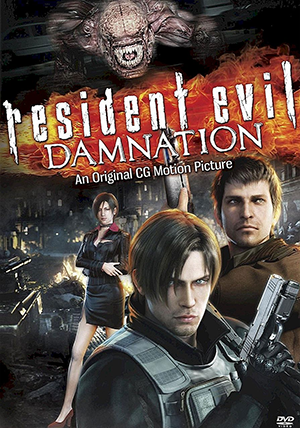 A civil war is raging in the fictional Eastern Slav Republic, between the oligarchy that's seized control of the country and the freedom fighters that represent the lower class. The military sat out the war and grew powerful, and after a cease-fire was declared, the military broke it in order to seize natural resources discovered in the freedom fighters' territory. In an attempt to even the odds, the freedom fighters have begun using black-market bioweapons.

The U.S. government sends in Leon S. Kennedy to investigate, as both the U.S. and Russia are planning to intervene in the war. After entering the field, Leon is ordered to pull right back out, but after seeing the destruction the B.O.W.s are causing, he goes rogue in an effort to stop them.

Damnation was released on DVD and Blu-ray in late September 2012, with a cinematic release in Shinjuku at the end of October. It was leaked a couple of weeks early on streaming video networks like the Xbox Live Marketplace, presumably in an attempt to capitalize on the release of Resident Evil: Retribution.

A second sequel, Resident Evil: Vendetta was released late May 2017.