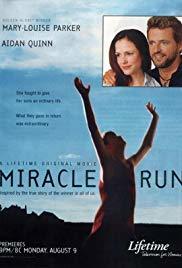 Miracle Run is a 2004 Lifetime movie written by Mike Maples and directed by Gregg Champion. It focuses on Corrine Morgan (Mary-Louise Parker), a single mother who finds out that her twin sons Steven (Jake Cherry) and Phillip (Jeremy Shada) are autistic. She works with a therapist to teach them language and social skills, and over the years the brothers flourish. As they enter high school, Steven (now played by Zac Efron) develops a passion for athletics, while Phillip (Bubba Lewis) discovers a musical gift.