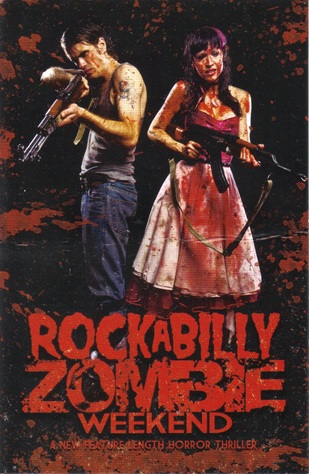 Rockabilly Zombie Weekend is a 2013 feature film that is Exactly What It Says on the Tin.

Becky and Grant are a redneck couple set to get married, and they decide to throw a big Rockabilly themed wedding at the old family barn in Central Florida, ignoring warnings of an outbreak of West Nile. Unbeknownst to them, a mysterious mosquito repellent sprayed by a cropduster has created something altogether more deadly...

Without warning, those hit by the repellent cloud or bit by infected animals transform into shambling monstrosities, their innards liquefying and driven by a primal urge to eat every living thing they see before they drop dead. Becky, Grant, and their family and friends must flee the chaos of the wedding as it comes under attack from their former companions. They don't care about what caused the virus or why it's happening. They just care about making it out of the city alive.

Rockabilly Zombie Weekend is the pet project of Tammy Bennett, an amateur screenwriter and doctor of Oriental medicine from Longwood, Florida. Combining her love of music with her love of horror films and zombies, she began work in 2011 by herself. With the help of local director Jaime-Velez Soto and her family and friends, she raised the funds and successfully put together a feature film with almost 200 extras, guns, fire, cars, crashes, soldiers, and aircraft.