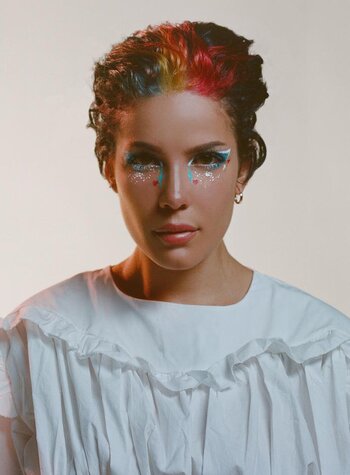 "I will never be anything but honest."
Advertisement:

Ashley Nicolette Frangipanenote pronounced "FRAN-jih-PAW-nee", like the flower (born September 29, 1994), better known by her stage name Halsey — both an anagram of her first name and derived from Halsey Street in Brooklyn, where she spent much of her teen years — is an American singer-songwriternote of African-American, Hungarian, Irish and Italian ancestry. Her sound has been generally classified as electropop, alternative pop, and/or R&B, and is notable for its consistent conceptual overtones.

Frangipane played several instruments in her youth including the violin, viola, cello and guitar, and as she is biracial to a white mother and black father, she credited her parents' contrasting music tastes (Nirvana, Creed, Alanis Morissette, etc. from her mom; The Notorious B.I.G., 2Pac, Bone Thugs-n-Harmony, etc. from her dad) with the diverse influences she takes for her work.

Although Halsey began gathering an online following through her music and content in 2012 (predominantly through Tumblr), it was her 2014 single "Ghost" that would become her first breakout hit, generating massive buzz after being uploaded to SoundCloud. Among the several record labels that immediately came knocking, she ultimately signed with Astralwerks as she felt they gave her the most creative control. She co-headlined with Young Rising Sons in 2015, and then performed as an opening act for Imagine Dragons and The Weeknd. Her rapid rise to success led her to a solo tour in September 2015. In 2016, she collaborated with The Chainsmokers on their song "Closer", which became a huge #1 hit almost immediately after it was released.

Halsey is known for her candid attitude and online presence, liberal sociopolitical views, advocacy for causes such as LGBT rightsnote as she is openly bisexual and has dated women in the past, reproductive rights and mental health awarenessnote as she was diagnosed with bipolar disorder after a suicide attempt at age 17, and raw, provocative lyrical style.

In March 2021, Halsey announced she uses they/them along with she/her pronouns. Halsey is currently in a relationship with Turkish-American screenwriter Alev Aydin. They have a son together, Ender, born July 2021.

Her work provides examples of the following tropes: