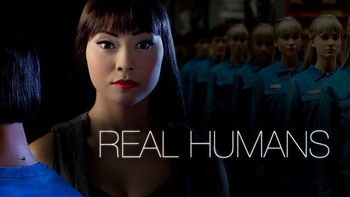 Also known as Äkta Människor (original title), Real Humans is a Swedish Science Fiction drama series that first aired on SVT in 2012 and has been sold to more than 40 countries. The shows deals with a parallel present where humanoid robots ("hubots") have gained a significant place in society. Humans use them as domestic help, workers, or even as sex toys.

But their condition also causes debates between humans. Some think they should be treated like humans, have rights and be respected; others, like the "Äkta Människor" (aka "the Real Humans", a political party where the title comes from) think they are a nuisance and should be exterminated. And then there are the "Children of David", a bunch of wild and free yet dangerous, rebellious hubots with obscure goals.

In 2015, the series got a British remake called Humans.