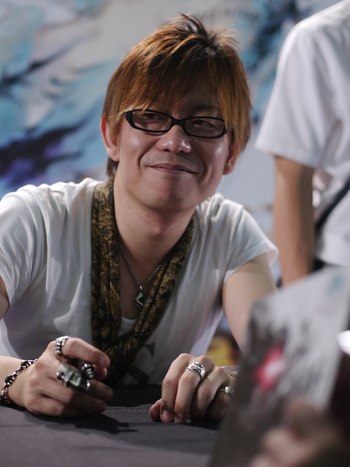 Naoki Yoshida (born May 1, 1973) is a developer for Square Enix whose greatest claim to fame is salvaging the now career-upendingly popular MMORPG Final Fantasy XIV, in so doing saving the Final Fantasy franchise, as well as Square Enix itself, from the brink of financial oblivion.

Yoshida is also known affectionately by the nickname "Yoshi-P", with the "P" standing for "producer", his most well-known role in video game development. He joined the games industry in 1993 when he was hired by Hudson Soft, where he helped to work on Tengai Makyou and Bomberman before leaving to work with smaller studios. He would be inspired by the works of Yasumi Matsuno, a Squaresoft developer who created Tactics Ogre and Final Fantasy Tactics, and would work towards the goal of creating a game with his idol, eventually joining Square in 2004, by which time Matsuno had left to join Level-5.

Yoshida was initially assigned to aid in the development of Dragon Quest games, but in 2010, he was transferred to another team and given an unenviable task: making a success out of Final Fantasy XIV. At the time, FFXIV was a spectacular disaster, with the game being widely declared the absolute worst Final Fantasy game in the series and becoming a massive financial sink. Yoshida had been chosen as the new head leader of the development team for his experience, charisma, and passion for making players happy. Yoshida was not acquainted with any members of the FFXIV team at that time, and working with the game proved to be an arduous task. Under his leadership, however, Yoshida managed to make various additions and quality-of-life changes to FFXIV, gradually improving the game's reception.

It soon became apparent, however, that there was a limit to what Yoshida could do with FFXIV in the state that it was. As such, he made a daring proposition to the leaders of Square Enix: to completely scrap the game and rebuild it from the ground up. Nothing like this had ever been done in the history of the MMO genre, but with Square in increasingly dire straits, Yoshida was given the green light to proceed, continuing to maintain the game until its eventual closure while simultaneously developing the new version of FFXIV.

In what would be Square and Yoshida's make-or-break moment, Final Fantasy XIV: A Realm Reborn launched in 2013. To the surprise of the video game industry and players alike, the relaunched game was a massive critical and financial success, recuperating the profits Square had lost on the original 1.0 version of the game and becoming a household name among MMORPGs. For many years after, the game would see continued success as Yoshida continued to head development, as well as finally achieving his dream of working with Yasumi Matsuno with an Ivalice Alliance crossover questline in the FFXIV expansion Stormblood.

What distinguishes Yoshida among his peers is how closely he works with the playerbase of FFXIV in development, maintaining a great deal of transparency through blog posts and a "Letter from the Producer" livestream series to keep players apprised of changes and additions coming to the game. He also enjoys playing MMORPGs, himself, taking inspiration from western influences like Everquest and World of Warcraft.

Tropes common in his works include: