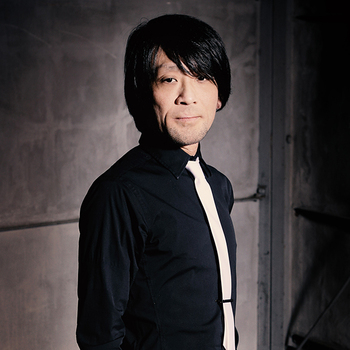 Masayoshi Soken (born January 10, 1975) is a video game composer and sound editor at Square Enix best known for his work on the Final Fantasy series, namely Final Fantasy XIV and Final Fantasy XVI. Considered by some to be the spiritual successor of Nobuo Uematsu, Soken joined Square in 2001 as a sound designer, working on games including Drakengard 2 and Front Mission 5 before making his major debut as a solo composer on Mario Hoops 3-on-3. He would go on to work as a composer for Dawn of Mana and Nanashi no Game before joining as a sound director and composer for the then-upcoming MMORPG Final Fantasy XIV.

Following the debacle of FFXIV 1.0, and the subsequent restructuring of the development team that saw Naoki Yoshida become producer & director of the game, Soken was notable for being one of the very few members on the team who believed in Yoshida's then-considered ambitious and nigh-impossible task of rebuilding the game. Yoshida and Soken would very quickly form a working relationship on FFXIV, with the duo regarding each other as close friends.

As FFXIV was rebuilt, so too did Soken's work on the game. He would go on to work as the main composer and sound director for A Realm Reborn and all the subsequent expansions. During the development of the patch content for Shadowbringers and the then upcoming Endwalker expansion in 2020, Soken underwent chemotherapy for cancer that went into remission following treatment. That did not stop Soken from continuing with his work on FFXIV. In June 2022, Soken was revealed as the composer of Final Fantasy XVI, to the delight of many who were familiar with his work on FFXIV.