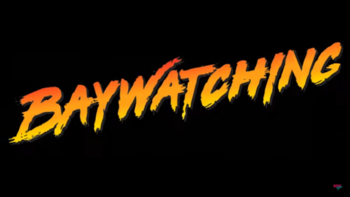 Created by an Idiot
Advertisement:

A web series by Allison Pregler of Obscurus Lupa Presents and Movie Nights fame. The series is, as the title would suggest, a recap of every episode of Baywatch. She is also covering Baywatch Nights concurrently with the series starting with its launch in season 6 of the regular series and plans to cover the reunion special. In addition, she reviewed the 2017 feature film reboot, well out of order (but as she noted, if she'd waited until 2037 when she would finally get around to it if she took things in order, no one would care).

The series style has Allison recapping the episode with a healthy amount of snark—her Abridged Series- style Alternative Character Interpretation of the characters and plots, usually over awkward screencaps of the characters, and silly voice acting lends a...unique perspective on the events of each episode. The original series of Baywatch is about the lifeguards of Baywatch Beach, lead by Mitch Buchannon, a single father with a love of food and a bit of hero complex, and a rotating cast of characters, each with their own quirks and personalities. The Baywatching series quickly turns into a show about Mitch Von Malibu, an egotistical, attention-hungry, omnicompetent, dog-hating meat-eater with deep-seated attachment issues, desperately clinging to his youth, and a rotating cast of other lifeguards who are mostly incompetent.

, and a full playlist of the series can be found here.

The comedic critique/abridged series ''Baywatching'' originally began with a montage that showed the absurdity of the ''Baywatch'' television series, as well as its spin-off ''Baywatch Nights''. These were later shortened due to copyright.

The comedic critique/abridged series ''Baywatching'' originally began with a montage that showed the absurdity of the ''Baywatch'' television series, as well as its spin-off ''Baywatch Nights''. These were later shortened due to copyright.