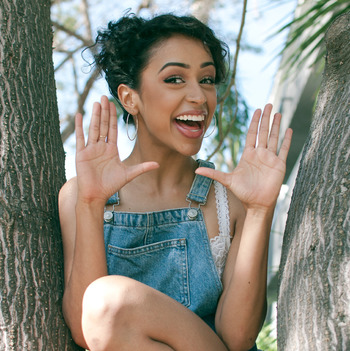 "A little brown girl with big dreams."
"It's your girl, Liza. Coming at you..."
Advertisement:

(born March 31, 1996) is an American actress, comedian, and YouTube personality.

She first gained a following on Vine; posting comic videos under the pseudonym "Lizzza". By 2016, Koshy was also becoming noted on the YouTube platform and she became "the fastest YouTube personality to reach 10 million subscribers". As of October 2018, her main YouTube channel has over 16 million subscribers.

She, and her videos, are well-known for "her loud facial expressions, quick pace, and her commitment to looking as ridiculous as possible as the joke demands. [Some of her videos] take serious issues – like anxiety, the pressure to fit in, and internet trolls – and make them accessible and engaging for her viewers."

Outside of YouTube, she appeared in the Hulu series Freakish, was the host of the 2018–2019 revival of Double Dare, and stars in a comedy series she created: Liza on Demand. She voices Zipp Storm in My Little Pony: A New Generation.

Liza and her videos provide examples of: