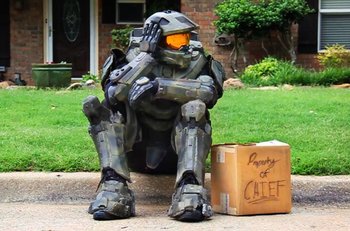 ♪ And you are myyy best friend, forever! ♪
Living With Chief is a Roommate Com by Impact Props starring a flanderized version of Master Chief from Halo being dropped into a Slice of Life scenario with a bunch of mischievous roommates.

Its first episode was premiered on Impact Props's YouTube channel, and is currently at 35 episodes. It's been on a hiatus as of late, thanks to the unfortunate fact that the Chief suit was actually lost in shipping.