All Just a Prank 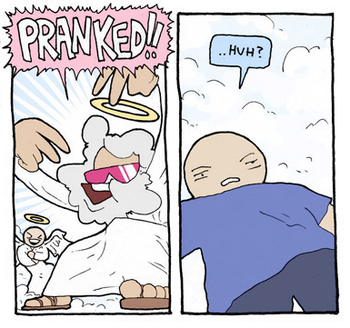 Gotcha!
Louise: I don't understand. How did you do all this? And how did I fall for it?
Linda: It was a lot of work. So many e-mails.
— Bob's Burgers, "The Hauntening"
Advertisement:

The "just a dream" trope has become so worn out that writers actively avoid it now. So how else can a main character be momentarily uncomfortable or threatened? Rather than conflict within the self, the conflict could be construed by a master-mind or a team of rascals: An event so elaborate that the person experiencing it will wish it was a dream.

The All Just a Prank trope is when a key plot in a story turns out to be a prank. This could be a prank in the comedic sense, but could also be something more sinister, where the victim/victims loses more than they gain. The trope not only fools the main character, but the viewer. Typically there are little to no signs that it's a prank, so viewers are left in the dark about their legitimacy. This can be compared with dream sequences that resemble reality and surprise viewers when they're revealed to be false. A sister trope of this is the Friendly Scheming trope, which applies to pranks that have positive results and brings people together.

Furthermore, the aforementioned dream trope and the current trope in discussion both rely on the suspension of disbelief. When a prank becomes too complicated, convoluted and expensive to be feasible, the viewer might assume it is a dream sequence. If there has been no indication of it being a prank, then the big reveal could be interchanged with someone waking up, and it usually has no major bearing on the plot. But as discussed, the "just a dream" trope is known to frustrate audiences and cause them to disengage with the text or criticise it.

The pranks depicted are often so complicated that only someone with an obsessive personality could create something so impossible. Several Plot Holes may arise following the reveal. Even if the prank is explained, it can sometimes raise more questions than it answers. It's also difficult to conceive of a plot being a prank if everything went as planned. With pranks that risk people's lives or sanity, it verges into Gambit Roulette, as anything could happen. Characters who are victim to the prank may lose their sanity or hold a grudge against the jokers.

Occasionally the prankers will get A Taste of Their Own Medicine; the joke becomes ''real'' or gets out of control. The jokers then have to apologise for the prank and the real-life consequences. This may lead to someone pulling a prank on them for revenge.

If the prank occurs over multiple episodes, then the big reveal may have an underwhelming impact. It may even be a tool for the writers to discontinue a plot without abandoning it too suddenly or confusing the viewers.

Compare Prank Gone Too Far, All Just a Dream, Maybe Magic, Maybe Mundane, Nightmare Sequence, Overly Pre-Prepared Gag, Gainax Ending, Shock-and-Switch Ending and And You Thought It Was Real. Can lead to a Surprisingly Happy Ending (although this is not a guarantee).

Note that is a spoiler trope, so beware! You Have Been Warned!