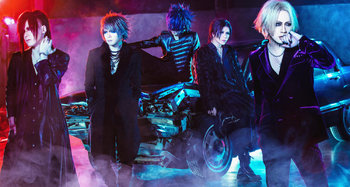 The Gazette (stylized as THE GAZETTE and formerly the GazettE) is a Japanese Visual Kei heavy metal band formed in Kanagawa in 2002. Originally an Alternative Metal band, their sound has evolved throughout the years, encompassing Nu Metal, Hard Rock, Industrial Metal and Metalcore. The name "gazette" is possibly a reference to their frequent use of lyrical themes that deal with violent crimes and worldly issues.note Though the band claims that their name is the word "cassette" deliberately misspelled

The band was originally signed to Matina, but shortly after producing a few songs, they switched labels to PS Company, a sub-label of Dynamite Tommy's Free Will Records. Their material is released by PS Company through Sony Music Entertainment Japan.

Along with An Cafe, Nightmare, exist†trace, Miyavi, and post-Visual Kei prog-death metallers Dir en grey, they were part of the second wave of Visual Kei bands, and are currently one of the biggest names in the modern VK scene, both in and outside Japan. They are often described as PS Company's best-selling visual band, as well as an important act in the modern VK scene.