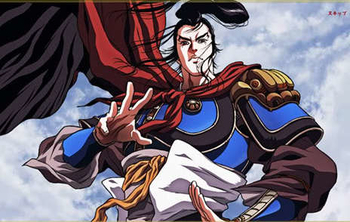 Souten Kouro is a manga written by Hagin Yi and drawn by King Gonta, based on the Sanguozhi, a chronicle of the Three Kingdoms period. Unlike Yokoyama Mitsuteru's Romance of the Three Kingdoms, it portrays Cao Cao Mengde as the hero. It lasted for 409 chapters (published in 36 volumes), even after the writer died.

Adapted into a 26-episode anime by Madhouse in 2009, starring Mamoru Miyano as Cao Cao.