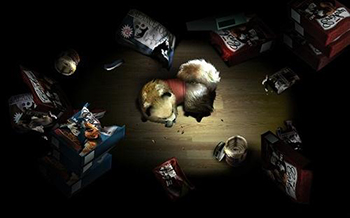 The time has come. The beagles will have their vengeance.
Advertisement:

Tokyo Jungle is a PSN game set After the End in Tokyo, in a world where animals have started becoming more and more aggressive and the humans have mysteriously vanished. You play as various animal species trying to survive in a world without people. You start out with the ability to play as either a Pomeranian or a deer, and can unlock other species like bears, hippos, cats and even dinosaurs as you play.

There are two main modes: "Survival Mode", where you choose an animal you've unlocked and try to survive for as long as you can, and "Story Mode", where you accomplish a series of challenges as a given animal and learn more about how the end of the world came about. Alternating between the two modes is necessary to unlock new Story Mode missions, as you have to collect logs and files in Survival Mode to get more Story missions, but completing Story Mode unlocks new files in the world in Survival.