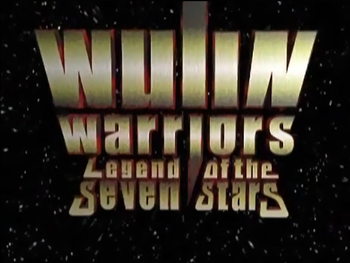 Wulin Warriors: Legend of the Seven Stars is an English language cut of the 25th season of Pili/Thunderbolt (that being Pili Heroes: Battle of the Kings), the Taiwanese puppet drama, condensed into 14 episodes. It was aired on Cartoon Network's Toonami block around 2006, where it only aired 2 out of the 14 episodes due to low ratings. All 14 episodes were also on AOL's Kids Online channel before it was shut down.

The story goes more or less like this... The Oracle has trained 3 of the Wulin Warriors named Scar, Lone Sword, and Phoenix to be the best swordsmen atop the Wulin Academy. However, a dark force approaches and there will come a time when they'll have to fight, and if things turn bad, they will have to call upon the "Power of the Stars" by finding the "Seven Stars". That or see the intro here

to see what exactly The Oracle means, and the weird-sounding rap intro that goes with it, which doesn't fit the series as a whole.

Funnily enough, there is a Pili season unrelated to this also called Pili Xia Ying: The Wulin Warriors. Compare Thunderbolt Fantasy, a similar Taiwanese puppet drama. See also Pili Fantasy: War of Dragons, a Spiritual Successor that continues much of the previous plot. All 14 episodes can be seen here