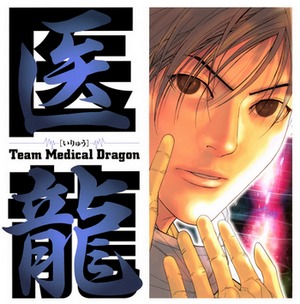 Iryu Team Medical Dragon is a manga by Akira Nagai drawn by Taro Nogizaka, made into a four-season Live-Action Adaptation.

The series follows Dr. Asada Ryutaro, a Japanese heart surgeon who spent years working for an NGO in war-torn countries. He catches the eye of Dr. Kato Akira, another cardiac surgeon who works by-the-book even in a war zone in the middle of nowhere. Years later, when Kato is working on a thesis about a promising new surgical procedure called "Batista", Kato enlists Asada to head up her star surgical team. Asada, however, lacks any faith or investment in the Japanese university medical system and only reluctantly agrees to work for Kato.

Kato is caught between a rock and a hard place. In order to secure her professorship at the hospital, she has thrown in her lot with Dr. Noguchi Keno, who agrees to support her only as long as her thesis can help him fulfill his ambition to become the head of Meishin University Hospital. Vicious interdepartmental politics takes far greater precedence in Meishin's upper echelons than any other occupation — including saving lives and fostering the abilities of good surgeons and physicians. Nevertheless, Kato is given some leeway to assemble her Batista team... which means she leaves it up to the rebellious Asada, who is hard enough to handle on a good day. That's the rock.

The hard place, for Kato, is her rival Dr. Kirishima Gunji. Unbeknownst to Kato, Kirishima is working on the same procedure — and going about it in a far less ethical manner.

While Asada assembles his team one by one, he keeps himself busy by working in the hospital's ER. The head of the ER, Dr. Kitou Shoko, desperately wants to poach Asada from the cardiac department: his skills are exceptional and his position tenuous at best. Asada, Kato, Kitou, Noguchi, and Noguchi's rival on the hospital board engage in a delicate game, for on top of all of this, Asada wants Kitou's natural-genius anesthesiologist Dr. Arase Monji for his team.

Meanwhile, Asada must collect and keep the best and brightest people he can find. His first teammate is Satohara Miki, a nurse who worked under him in the NGO. The second addition is Dr. Ijuuin Noboru, an intern who has yet to be corrupted by the politics and shenanigans of the hospital, but lacks confidence in his skills or the ability to act independently. Dr. Fujiyoshi Keiji joins after his own heart condition requires Asada to operate on him. Kato herself is added as first assistant.

Once the team is assembled, their troubles only multiply.

Team Medical Dragon has been serialized in Big Comic Superior from 2002 to 2011, amassing 25 volumes overall. It received the 50th Shogakukan Manga Award for general manga in 2005. The story uses a cast of characters and focuses on many problems prevalent in medical care, such as human error, anticancer agent treatment, hospital infections, and a troubled health care system.